Pairing Cigars With The Best of Suau Spiritis

One of the customs that we have in Spain and follow scrupulously is to enjoy a drink and a cigar after a good meal to round off the feast on special days. Experts in this sector consider that brandy and cigars are a perfect combination and that choosing the right combination identifies the most subtle flavors. A good brandy consumer believes that the drink is the most important part of the equation, and cigar smokers consider the cigarette to be the most important part of this enjoyment.

Our Cigar Brand Ambassador, Gabriel Horrach Adrover, author of the well-known CactusiCopninyas instagram account and member of the prestigious Club Momento Humo, has helped us

Brandy Suau 15 is a classic. For those of you who already know it, you know that it has a lot of complexity and presents some notes of caramel combined with toasted oak, black pepper and vanilla.

On the palate, it is a very fruity brandy, slightly sweet and with a long finish on the palate, without tingling or bitterness of any kind. To pair this special brandy, our cigar Brand Ambassador suggests La Flor de Cano Mágicos Exclusivos España, a cigar with a molasses-colored layer, a uniform layer with some vein and a long smoke, of about 50 minutes, to enjoy with soul of the contrasts of Brandy Suau 15.

Gabriel says that when we bring this cigar to our nose, we find a Cuban aroma and when we start the cigar, we will enjoy a sweet aroma with hints of different kinds of wood. Later, when we have passed to the first third, we will discover a very marked taste of wood and nuts, such as pistachios and hazelnuts.

The second third is somewhat flatter, it does not modify the criteria of the first third and it holds up well in the mouth. In this final part, the ginger and bitters are triggered. The smoke is quite uneven throughout and its ash has a lot of stands. The vanilla and nutty notes of the brandy are complemented by the woody and bitter notes of the cigar balancing sweet and sour alike.

Suau 25 brandy opens our range of “prestige” brandies. It is a very sophisticated distillate, and its exquisite quality is based on time, silence and the microclimate of our bodega. Its flavor is slightly fiery in the mouth, with hints of caramel, vanilla, raisins, roasted apples, pear compote and toasted oak. Slightly sharp, without stinging, unctuous, full on the palate, in the retro nasal routes it feels balsamic.

Our Cigar Brand Ambassador recommends that we accompany this high-quality brandy with a Davidoff Winston Churchill The Late Hour Robusto, a very high category blend made with tobaccos from the Dominican Republic, Nicaragua, Ecuador and Mexico, although this cigar is designed for some smoky nuances and a lot of wood, which fits with the strength of character of a 25-year-old brandy that already has much more body.

We are talking about a tobacco with a mature color layer, somewhat oily and with few visible veins. The cigar surprises us at first with its hints of pepper and wood, with a medium and balanced strength. When it evolves, we find a creamier cigar, with nuts, bitter cocoa and reminiscences of cinnamon. When we reach the last part, we have memories of cinnamon and the bitters of cocoa. It is a cigar that lasts about 50 minutes, pairing it perfectly with Suau 25, as it’s time to be enjoyed should not be rushed and seen as a luxury.

The Suau 50 is unique and is one of the prides of the bodega. The maturing and aging system of this distillate began decades ago and presents a combination of different blends with a 50-year-old mother.

The secret of its exquisite quality lies in time, silence and the microclimate of our underground cellars protected by a one meter and eighty-centimeter wall that is impenetrable by smells and noises. Its flavors remind us of coffee, vanilla, raisins, dried figs, fruit confit and cocoa.

Our Brand Ambassador recommends that we pair this brandy with a pure Oliva Serie V Melanio, quite a different blend compared to the traditional Serie V, because it has a Sumatra layer from Ecuador and a tobacco casing grown in Nicaragua. The tobaccos from this region are widely known for their range of flavors and nuances.

It is a high strength cigar in which wood, moss and coffee predominate. This Melanio is very creamy and has an ash without any stands. When in your hands, it has a chocolate-colored oily layer and has minimal veins. Our ambassador has chosen this pairing because the caramel and herbal aromas of the cold tasting match perfectly with the memories of the coffee and wine of Suau 50 As he explains, when we smoke the first third of this cigar, we find pepper and coffee flavors, in addition to some alkaline, moss and wet earth.

They are nuances of the earth, minerals, wet and mountain, which marry very well with the smoky nuances of the nose of this brandy. Starting the second third, the aromas of roasted coffee predominate, caramel nuances disappear, and a cinnamon finish is noted. The ginger notes appear at the end of the second third.

The double aging of Ron Jungla (Rum Jungla) in American oak barrels that previously contained Brandy Suau make this product unique, thus combining the flavors of a Caribbean rum with our solera brandy.

The Rum Jungla by Suau was born with the intention of bringing the Caribbean closer to the Mediterranean, Cuba and Mallorca, a personal project to achieve an exclusive product with a very special bouquet.

On the nose, this rum is characterized by its aromas of grapes and dehydrated plums combined with notes of cane sugar molasses, also highlighting hints of toasted oak, vanilla and toasted nuts, bitter almonds and toffee caramel. In the mouth, it has a smooth entry, it is structured and meaty, with a lot of body and character.

You can drink it by itself or with ice. Our Brand Ambassador’s opinion is that this rum goes perfectly with a very fresh La Aurora 107 Nicaragua Robusto cigar. Its construction presents a light colored, rough and oily layer. After the cut, the beginning of the cigar is very sweet, with hints of pastries. When we light the cigar for the first time, hints of cinnamon and roasted coffee appear accompanied by very predominant herbal notes, which are accompanied by subtle hints of leather and cocoa, without forgetting the cedar wood.

When we get to the second third, which in his opinion is the best, we realize that the hints of spices clearly predominate. The party is joined by citrus notes with subtle bitter grapefruit. If in the first third the coffee notes were very toasted, now they give way to a very accentuated creaminess that is always accompanied by a subtle hint of vanilla. We come to the last part. The smoke is being very balanced.

We have been able to appreciate a very dense and clean smoke throughout. When we look at the ash, we can see that no stands appear and that they are of a grayish hue. In the final stretch, the previously very predominant spices disappear and toasted hues and leather are accentuated. Here we can say without any doubt that the pairing has been a success, the choice of a Rum Jungla for this tobacco is a winning bet. 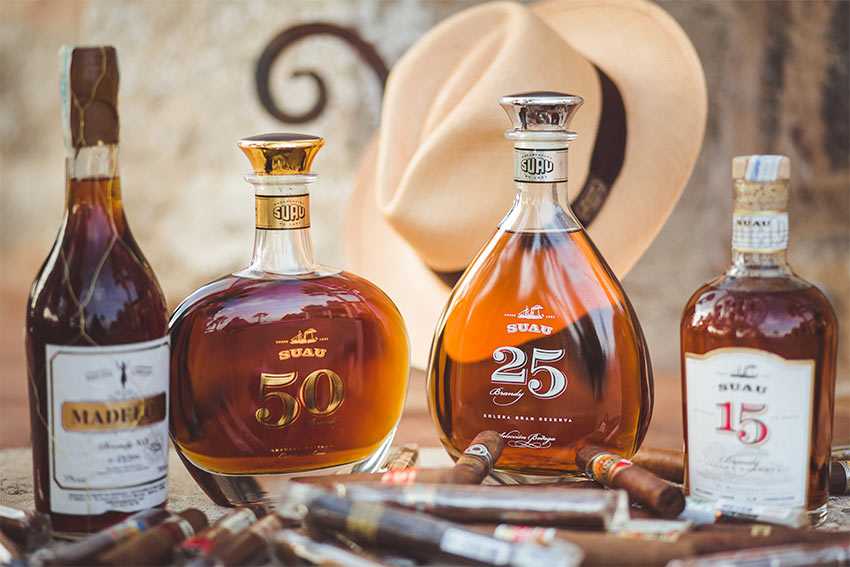 Are you old enough to drink/purchase alcohol?

To visit the Suau site, you must be of legal drinking/purchasing age in the country in which you are accessing this site. If there is no legal age for consuming alcohol in your location, you must be over 18.

UNFORTUNATELY YOU CANNOT ENTER BODEGASUAU.COM AS YOU ARE NOT OF LEGAL DRINKING AND PURCHASING AGE. https://www.responsibledrinking.eu

The abuse of alcohol is dangerous for your health.
www.responsibledrinking.eu
Suau supports the responsible consumption of its products

We use our own and third-party cookies to improve our services, compile statistical information and analyze your browsing habits. This allows us to personalize the content we offer and to show you advertisements related to your preferences. By clicking "Accept all" you agree to the storage of cookies on your device to improve website navigation, analyse traffic and assist our marketing activities. You can also select "System Cookies Only" to accept only the cookies required for the website to function, or you can select the cookies you wish to activate by clicking on "settings".

These cookies are necessary for the website to function and cannot be disabled on our systems. They are generally only set in response to your actions in requesting services, such as setting your privacy preferences, logging in or completing forms. You can set your browser to block or alert you to these cookies, but some areas of the site will not work. These cookies do not store any personally identifiable information

These cookies allow us to count visits and traffic sources so that we can assess the performance of our site and improve it. They help us know which pages are the most or least visited, and how visitors navigate the site. All information collected by these cookies is aggregated and therefore anonymous. If you do not allow these cookies to be used, we will not know when you visited our site and will not be able to assess whether it worked properly

These cookies allow the website to provide better functionality and customization. They may be set by our company or by external providers whose services we have added to our pages. If you do not allow these cookies to be used, some of these services may not function properly

These cookies may be set through our site by our advertising partners. They may be used by those companies to profile your interests and display relevant ads on other sites. They do not directly store personal information, but are based on the unique identification of your browser and Internet device. If you do not allow these cookies to be used, you will see less targeted advertising